Robert Schalles with dog before the war

After the war, on January 20th, 1922, Robert enrolled in “The Rahe Auto and Tractor School” for $120.00. There are two photographs that help confirm this. One shows him in Kansas City (where the school was) and another shows him working at a company called “Globe Auto Battery,” which would help explain his job with Los Angeles Water and Power (see next page).

Robert eventually left Colorado and moved to Los Angeles where he worked for the Department of Water and Power. In 1931 he joined the Masonic Lodge, an organization his father had belonged to since 1887. In the middle of 1933 he met his future wife, Esther Martha Augusta Rattey. They were married in December of that year. Robert was 40 and Esther was 22. In 1935, their daughter, Carolynn was born. 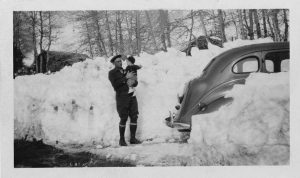 Robert moved his family to June Lake in the High Sierra Mountains of California in early 1936 to work on the construction of an eleven mile tunnel through the mountains to bring water to Los Angeles. Later they bought a cabin in “Tickville” for $160.00 that was closer to “Shaft 2” where Schalles was working.

Robert was a battery man. The locomotives that went in and out of the tunnels were powered by batteries. As the job wound down, Schalles was transferred to the “West Portal”, so they sold the cabin and moved to Lee Vining and then to Kane Ranch until the job was done.

They moved back to Los Angeles around 1940 or 1941. There they built a new home and Schalles went to work for the Fluor Corporation where he steadily moved up until his retirement in 1963.

Soon after retirement he purchased a tablesaw which he used to build beautiful patio furniture, a dog house and many other things.

Robert and Esther moved to El Cajon, California in 1975 to be closer to their only child, Carolynn, and their four grand children.

Robert kept a large, impressive garden in their small backyard.